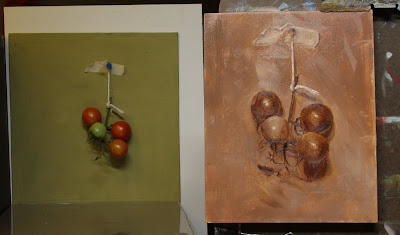 Several of the artists in our group (Daily PaintWorks )thought it would be fun to all paint the same subject. We decided to all paint tomatoes.

I thought I was very clever. I taped the tomatoes on a painted canvas board so I could have a different background color... Not two minutes went by after I finished drawing this arrangement and the tomatoes dropped off the board. The tape could not hold the weight so I had to reinforce it with a tack. Good thing the tomatoes didn't break off the stem. 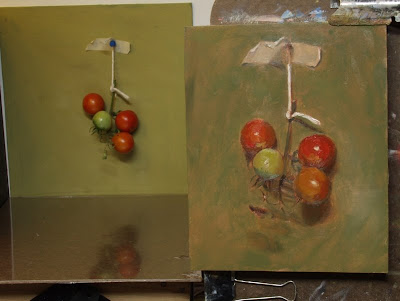 I don't know why I would call this a Still Life...as soon as I hung them up for the second time I noticed....the tomatoes started sagging and the leaves started curling. I thought the painting gods were ganging up on me. 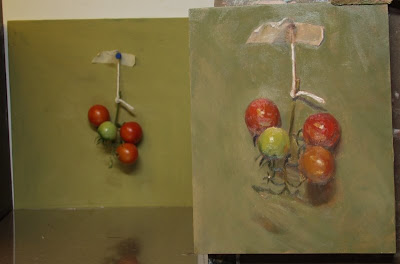 Almost finished. If I ...I mean if the tomatoes could just hang on a few more minutes. 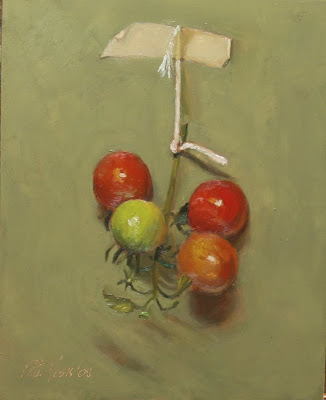 click on the image to enlarge the painting
Tuesday's Tomatoes
original by Peter Yesis
8"x10"
oil on masonite
SOLD
I had to remove the tack. All I kept imagining was in two hundred years some art collector is going to find this piece in an old attic. Then they are going to go crazy analyzing the meaning of the tack and tape ... " why would the artist paint both a tack and tape holding up the tomatoes? What was he trying to say to us?"
I can't go to my grave knowing I may be the future subject of an art major's term paper.... so I took the tack out.
I am so conventional.
Posted by Peter Yesis at 7:43 AM

Beautiful painting and amusing text. I love this -

A Brush with Color said...

I initially said I was so glad you included the tack and string in the painting and then realized you'd said you took the tack out. Cracks me up--I still love that the string and tape are there, anyway!!

Wonderful painting and killer commentary...I had a great laugh!

There's something just a wee bit sinister in this arrangement. An interrogation? Tomato prisoners? The tack would have made it even more so. I love your take on the DPW collective subject. Great painting.

I like the greyed green background with the reds. They must have been small tomatoes to hang by a piece of drafting tape.

Ha - great story! Your perspective on life and painting is thoroughly enjoyable and it's refreshing that you are willing to share your foibles and challenges.

Your blog is always such a treat to visit. I appreciate being able to read about your experiences and thoughts while you paint, and to see the progress of your wonderful paintings.

This is the first time to your blog. This is great. I have never had lessons and this is like I am in school. I love it. I will be back often!! Kathy