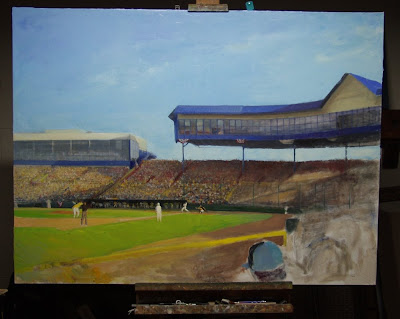 The epic painting continues! OK, maybe I'm being a bit dramatic, but drama is what you need when painting a baseball game. If you think watching baseball is slow going , try painting it! I have the sky 90% complete (because that was the easiest part) and I have the guys in the dugout about the same. I removed the camera guy in the bottom left corner. I think the final detailing of the fence will work well enough.

The crowd is slowly coming along. I needed some inspiration for painting large crowds... 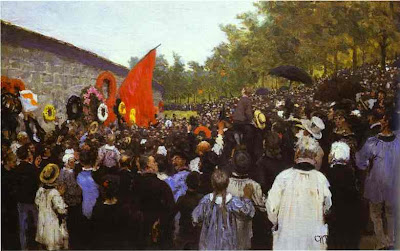 click on image to enlarge painting
So I checked out a few crowd paintings by Ilya Repin. This one is called The Annual Memorial Meeting Near the Wall of the Communards in the Cemetery of Père-Lachaise in Paris. The title almost has as many characters as people. 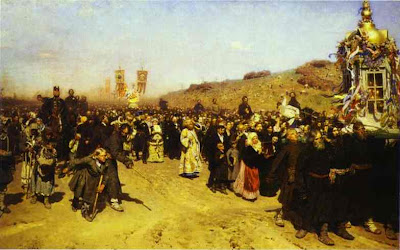 click on image to enlarge painting
Here's another. Krestny Khod (Religious Procession) in Kursk Gubernia. This guy was a master painter of crowd scenes. You can go to (this website) called Olga's Gallery to see more 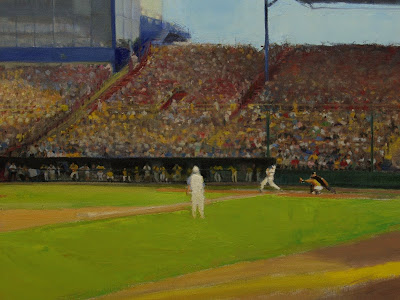 click on the image to enlarge the painting
I am using a palette knife when I want to lay the paint on thick. I used it in the sky , the grass and on the glistening white uniforms. My main goal now is to block in the rest of the crowd then go back and add some detail strokes to make the front rows stand out a bit. Several hundred figures started ...several thousand to go! I hope I finish before the season starts.
Posted by Peter Yesis at 3:56 PM

It is coming along nicely. The sky is so natural looking. I expect it is a bit easier than the fans to paint.