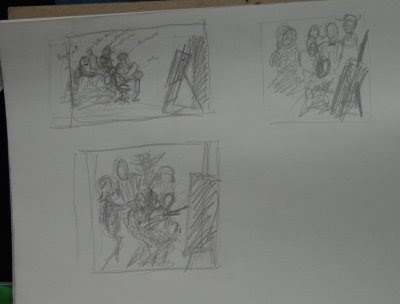 I wanted to do something special and fun with the last painting in this series. I had this idea of including a few of my art heroes in the painting with me.

The first step was to get the thought transferred to paper. This sounds easy, but I always have a difficult time with this step. I get the idea in my head picture perfect ( at least I think it is) until I go to sketch.... then reality takes over and the sketches barely make sense to anyone but me. It's good practice to do these anyway because it helps you visualize problems with the idea. 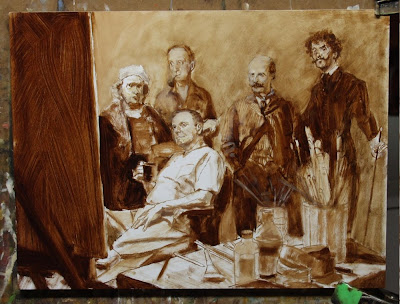 click on the picture to enlarge the image
The Last Self Portrait and a Few Friends
Day 29 1/2
work in progress
11"x14"
oil on masonite
Quite an improvement from the sketches right? If you don't recognize the boys they are, from left to right, Rembrandt, Rockwell,Homer and Whistler. And of course me and the tea cup.

You really need to break down the process into small steps to get the idea to this point. Here's a few of the steps :
1. First, I start taking lots and lots of photos of just me in different poses. This triggers a few ideas for the composition and lighting.

2. Decide which artists to include from the dozens of favorites. Don't worry about hurting their feelings if they don't make the final four. A few I selected but ended up not using included Van Gogh, Edwin Tarbell, Andrew Wyeth and Cecilia Beaux. It would have been nice to include a woman artist. But time and effort and space knocked them all out of the picture.

3. I sketched myself and the studio pieces first on tracing paper then sketched each figure on separate pieces of tracing paper so I could move them around. It would be easier in Photoshop but I am not fluent in photo editing.

4.Once the figures are placed transfer them all to the final surface and start painting. I am starting with a burnt umber under painting.

I'll post the final stages at some later point. Now I'm ready to paint something other than me. I hoped you enjoyed the series.
Posted by Peter Yesis at 10:41 PM

Email ThisBlogThis!Share to TwitterShare to FacebookShare to Pinterest
Labels: 30 self portraits in 30 days

Peter,
I have enjoyed following your 30 self portraits in 30 days. I especially like the many different concepts.I think this last one will be great. You were definitely up to the challenge.

Hi Pete, This last one is the grand finale
at a 4th of July fireworks program. Congratulations on completion of this wonderful portrait voyage. What a memorable trip for you, the artist and us, your viewers full of admiration. See you soon. RePete

Hi Peter, I enjoyed your portrait adventure and commentary. And even though I didn't comment on most of them, I read each post. This last one is a great finale. I hope you get to finish.

I didn't realize you had such fine caliber house guests. I can't wait to see this one done and I too have really enjoyed the series.

30 day and 30 portraits... means 30 different ways to look at yourself and to express what you saw. Thank you for sharing this adventure with others. The last one looks awesome... like the other 29.

This is really magnificent and stands on its own! The painting will also be more than wonderful!

Sure did enjoy the series Peter and this last one is your crowning glory! Look forward to seeing it develop.

Hi Peter, I have been enjoying your portraits. I think this last one is going to be awesome. Great work.
Tammy

What a grande finale!

Really enjoyed your series and loved your final installment.

They were all fun! This last one is one for the ages..literally. Really great!

I have followed this with a big smile on every episode. But this one made me laugh out loud with glee! You have a terrific sense of humor Peter . . .it is sooo obvious in this last piece. Finish it !!! Then hang it in a prominent place where studio visitors can see it. Whadda Kick !! :-))

You really got such a huge talent..i love all your works..really great to visit your blog..
--
Jack
Best Affordable Security Systems Suitable for Renters and Apartments, Business and RV