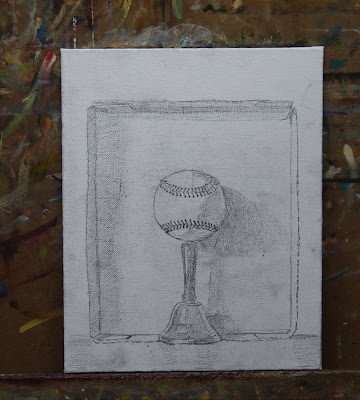 OK, OK, I know, another baseball you ask? I'm having fun. These baseball paintings are a blast to paint and compose with. I have so many ideas for them I may do one a week. This is my third painting in the series so finding a title was easy. 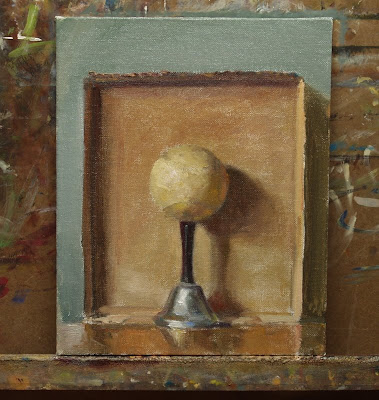 This painting has a strange story behind it. Baseball announcers have always used colorful expressions and witticisms to keep the game interesting. They talk almost none stop for the entire game so the best ones can get very verbally creative. Bob Uecker is probably the funniest play -by play announcer I have heard. You have seen him in the movies Major League and Major League 2. click on the image to enlarge the painting
Strike Three
original by Peter Yesis
8"x10"
oil on canvas board
I grew up listening to Phil Rizzuto call the games for the New York Yankees. His famous expression every time a home run was hit was "Holy Cow". I don't know where I heard the expression that inspired this piece, " Strike three- Ring the Bell". It probably was only said one time in the history of baseball by some unknown broadcaster trying his best to come up with something clever to say during a slow game, but it stuck in my head

"Well, that kind of puts the damper on even a Yankee win."
Phil Rizzuto, after hearing Pope Paul VI had died.

Now that is a Yankee fan.

Thank you for posting the way you do. I love it when I can see how other artists work. You make me want to paint!