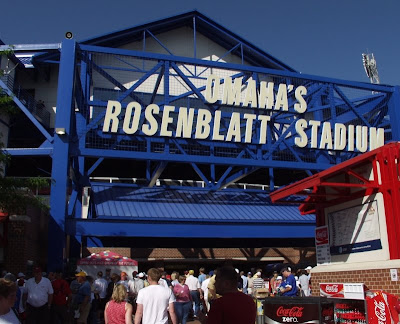 Warning: This is a long winded blog. If you have other things to do, read this later.

First a little background. Omaha hosts the College World Series for a week every year in a lovely older stadium called Rosenblatt Stadium. It is a bit of Americana. A big controversy brewed in Omaha over the last year because they are going to build a new stadium in the downtown area over the next 3 years and knock this one down. I hope they design the new one as close as possible to this old one...except for the bathrooms and vending areas, those need to be demolished. 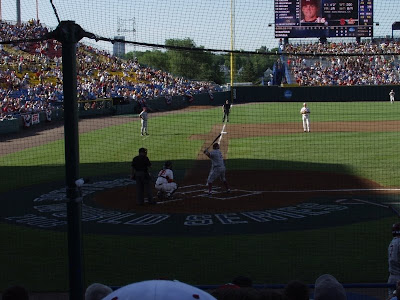 So here is the continuation of the story I mentioned in my last post. I drove over to the stadium early on Tuesday morning to buy a ticket and take more reference photos ...this time with fully charged batteries...two sets!

At 10:00 AM, the line for tickets was half way around the stadium so I turned to leave. I didn't want to spend all day waiting. As I turned, I bumped into a wonderful man selling one ticket. What a break, no waiting! I bought it and drove home. I had no idea where the seat was but I had one.....

This photo was taken from my seat. It doesn't get any better. The man I bought the ticket from has had series tickets and the same seats since the 1960's. I sat next to him and his lovely wife. In fact, I met several nice people around me, all of them had tickets for the same seats for years...some even handed down through the generations. The man on my left had been going to the series since the beginning ( that's 60 years!) I can see why there is so much nostalgia for this old stadium. They hate to see it go....except for the bathrooms. 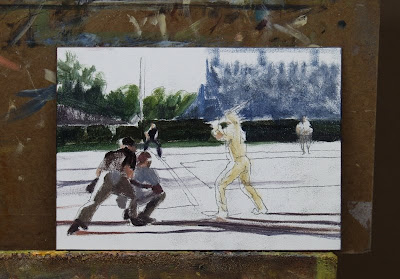 I was able to sneak down to field level and get a bunch of good shots. 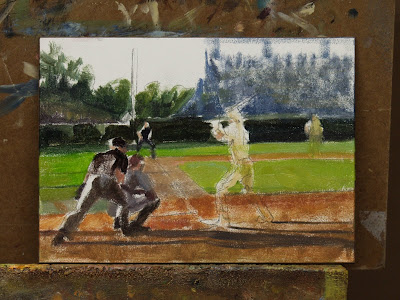 I love the choreography of baseball. It would make a great ballet. 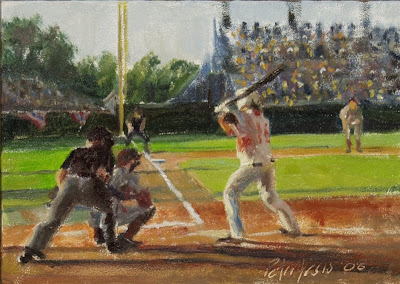 Playing at Rosenblatt
original by Peter Yesis
5"x7"
oil on masonite
I had a great time, met a bunch of terrific people took a bunch of photos. I have a lot of new ideas for paintings. I would like to capture the feeling of what it means to play and watch the game at Rosenblatt stadium before they knock it down. I guess I have my work cut out for me over the next 3 years.
Posted by Peter Yesis at 6:06 PM

Marvelous, although here in Europe socker is the game, .. especially now during the European contest, ...

what I was thinking, wouldn't the beating stick (how do you call that thing?) be coming loose more form the crowed when it was a little bit blacker, ... or a bit more contrast?

that's a great projet you have !Nice paintigs!