It has been quite a while since my last post.  I have several good reasons and even more excuses. But as always I look for the lessons in everything. (that's my positive spin on the events of the last month)

I am beginning to think that the  ancient Greeks/Romans/Celts/Norseman or any other early civilization that blamed things on the gods had good reasons. I think these gods still exist and are especially employed  to  pick on the lowly artist in his/her basement.

First this whole economic downturn thing:  Totally  created to affect  my sales and weaken my resolve to continue painting.. ( OK a few billion other people are affected too, but it was aimed at me).

Then whoever the god is that oversees  computers. I hope we meet in Hades. First they give us  a place to store our images  and records, then they  entice us into the world of blogging and finally they create sirens to lure us into listening to music on the web. ( you think naming the company  Pandora was a coincidence?).
Then they take it all away.

Oh, I know what you are thinking. Just go to another computer. But you can't fool the gods! Noooo. They play with your mind. They make you think the second computer is safe and working just fine. Then little by little they eat away at its ability to connect with  remote devices and the programs you  need begin to  disappear. You are left in a nether world of   black screens and  blinking cursors. They even  make it so your backup drive isn't formatted to  reconnect to your newly purchased .... third computer.

My third and final tirade is to commiserate with the poor guy these gods  had  pushing  a boulder up a mountain  all day only to have it roll down again just as he neared the summit ... he did this for eternity.  That was just a warm up for these art gods.. They  gave me the task of painting peonies. As soon as I get close, I am forced to repaint them. over and over and over... until she who must not be named steps in and ends my misery. 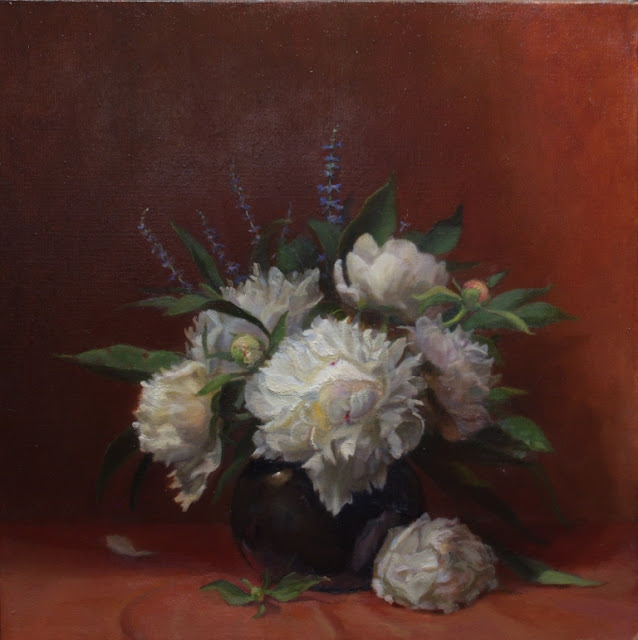 click on the image to enlarge the painting
Too Tired to give it a name
20"x20"
oil on canvas
I've come out of hiding now that we have a fourth computer. I don't consider myself to be a superstitious artist but I did rearrange the studio to face west and I did  pour a circle of  turpentine around the easel and I only clean my brushes on Sundays.
Posted by Peter Yesis at 7:41 AM

Have you thought about augmenting your income with comedy writing. I laughed out loud while reading. Unfortunately your words were all too true. Loved it.

Gorgeous painting and great commentary. It was all worth it to produce this beauty. That red is a red knockout.

Beautiful painting... sorry about your computer woes. I gather you are not a Mac person? Or maybe you are one now...

Peter fantastic as always, I was wondering if you had died and gone to heaven. glad to see your now back with a new computer.

Because I relate, you have me in stitches with this post!

When I've agonized over a painting I find it's best to turn it's face to the wall and not look at it ... for a long time. I hope that one day you'll see that it's a great painting. Perhaps, as I have done, you've just worked on it for so long that it makes you sick?

Nice article, approve. I will bookmark because this material provides concern information.

A very good article. I am looking for is information. Thank you very much for the great article .We are encouraged to write this great article came out again