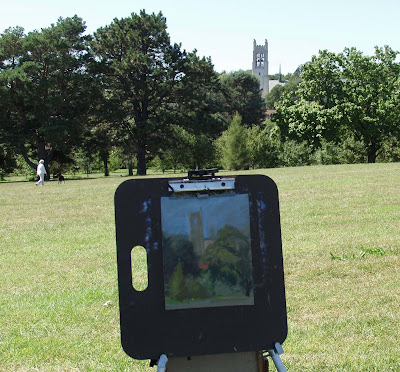 This is at Memorial Park in Omaha just across the street from UNO (University of Nebraska at Omaha). It is a wonderful city park on a sloping hillside with lots of open spaces and walking paths. A lot of people bring their dogs there for a walk and exercise. Like this women in white at on the left hand side of the photo. You can see her dog if you click on the photo to enlarge it.

The dog must have been half retriever half art critic. It was a very friendly pooch. It came running over and nearly knocked over the easel. So,I picked up a stick and threw it back towards the woman. It worked. The dog took off after the stick. "Now you did it." yelled the woman. " He won't leave you alone now."
Sure enough the dog was back dropping the stick at my feet. I gave it another toss, back he came. The woman continued to walk away over the hill. I gave one more toss toward her direction just as she called to him. It worked and off he sped. Five minutes later he came running back without the owner right through my painting bag knocking over the turps and making a mess of the paper towels. Then turned and ran home. I guess even dogs have a way of critiquing our work. 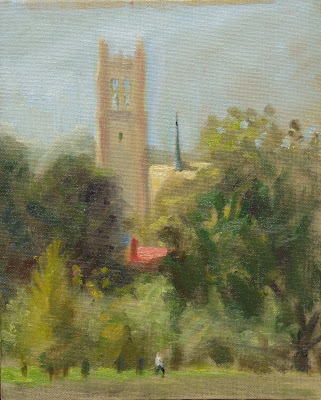 Needless to say I had to quit after that. I had the last word though. I put the woman in the painting....but left out the dog.
Posted by Peter Yesis at 8:20 AM

This is lovely. I might have included the dog, with horns and a pitch fork! That little devil.

This can't never happen in a studio, and when open for it, it
happens almost every plein air painting session, something weird/funny/stupid/remarkable or what ever happens.

This piece has great harmony, Peter. I am amazed, given the distractions!

Does anyone ever come to your easel and ask the profound question, "Are you an artist?" ;-)

I bet we could all come up with some dillies of comments or questions made by spectators. It would be fun to compare notes, eh? :-)