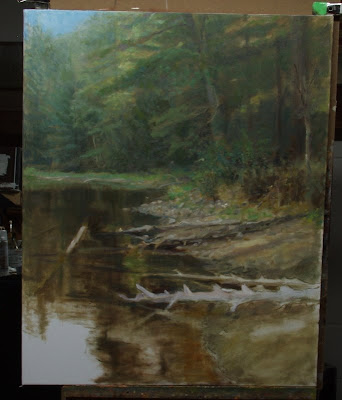 The work continues on my Northern Woods painting. Unfortunately I don't think I will make my deadline for the show with this one. I would rather have a good painting than a rushed painting.

I am continuing to move toward the foreground (still with the first pass) adding some indications of stones and leaves but no serious detail yet. 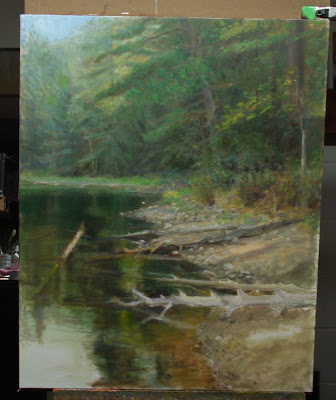 I am sharpening some objects and adding warmer tones now. The foreground needs to feel up close and you should feel the atmosphere between you and the background. The distance should be controlled with soft edges, color temperature ( cool grays) and thinner muted paint. 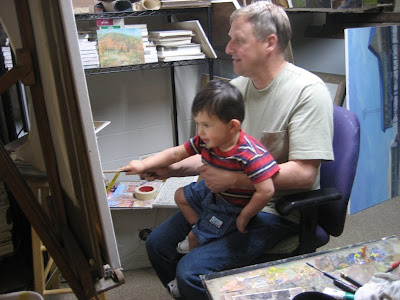 I admit I did have some help with the colors. Red was his favorite. But yellow and green were also added. He actually worked on the canvas choosing his placement for each brush stroke. It helps when there is another artist in the studio.

(The little painting over our hands is the plein air study I did in Santa Fe two weeks ago. That may end up a larger painting one day.) 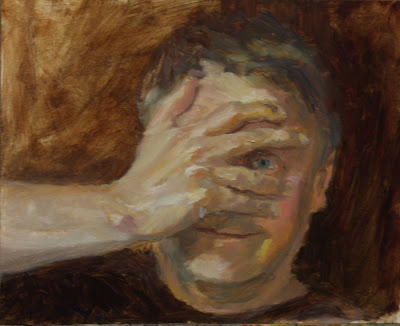 See No Evil
Self Portrait Day 13
8"x10"
oil on masonite
I have no idea where I first heard the maxim "See no Evil, Hear no Evil, Speak no Evil" It was probably in a cartoon I watched as a kid. ( I got most of my culture and history from comic books and cartoons ). The original version also included "Do no Evil"

My guess, it was probably what early Nara period (from AD 710 to 794) Japanese parents told their teenagers... "Don't look at that, don't listen to that, don't say that" and last "Don't do that"!
Posted by Peter Yesis at 9:07 PM

Email ThisBlogThis!Share to TwitterShare to FacebookShare to Pinterest
Labels: 30 self portraits in 30 days

Peter, As a fellow artist, I though I might attempt your challenge but I only made it through half of one. I decided to go back to my anatomy studies to brush up on proportion. I am glad to see you are smiling in this portrait.
I appreciate all your blog posts. They are very informative.

Hello Karen - Yes I agree History is full of too many frowns in artist's self portraits.Don't give up on trying another self portrait yourself, It will give you a great marker of where you started and something to measure your progress. Besides, it's a lot of fun!