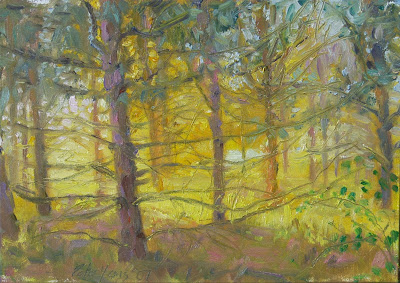 Morning Light in the Pine Woods
5"x7"
oil on masonite
SOLD
Morning light illuminating the pine trees in one of Omaha's parks. I had done a few sketches and taken a few photos last fall. While walking through this grove of young pine trees, I had to stop when the sun lit up the path. The woods took on an almost ethereal glow. I half expected to hear music or see faeries flying around. Instead a couple of teenagers appeared smoking cigarettes as they walked the path. I wonder if Thoreau had teenagers throwing stones in Walden's Pond as he contemplated the serenity of the woods?
Posted by Peter Yesis at 8:04 AM

Email ThisBlogThis!Share to TwitterShare to FacebookShare to Pinterest
Labels: landscapes